The Three Foundations of One Thunderbird Part II: The Wolfpack Cometh 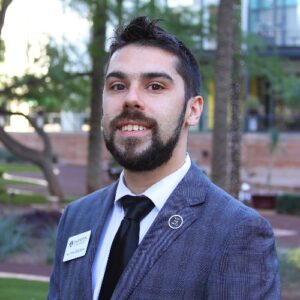 It was April 2019. I was just elected the Vice President of Finance for the Student Government (I ran unopposed, but I like to think it was because I created enough fear). Becoming a leader in TSG was nice, but the real role I wanted was a cohort leader for Foundations Fall 2019.

Over the 2018/2019 academic year, I made some close Thunderbird friends, including a tight-knit group called the Debutantes (love you Emma, Maddie, and Myla). I became well known on campus for my party animal nature and commanded a respectable amount of popularity. Not quite the big dog on campus, but getting there.

My cohort leader became a very close friend. We were there for each other for the best and worse that year. She actively pushed for me to develop as a leader on campus. I wanted to honor her by becoming a cohort leader on par or even exceeding her, and I also wanted to keep the Mystique alive and kicking. Foundations were the best opportunity to do just that; to create a family quickly out of the misfits.

I interviewed for the cohort leader position before I took off for my Global Consulting Lab in Quito in May. My cohort leader advised me to highlight my commitment to TSG and Thunderbird and to be myself (she cautioned me not to be too crazy. (Yes, mother)).

A month after my interview, I received an email from Earl while I was at the Heifer Ecuador office. I jumped out of my chair and hugged everyone in my GCL group, including Love, who didn’t want to be hugged but too bad I was too happy. I was accepted as a cohort leader.

My creative mind snapped into overdrive. What message was I to send to my new cohort? What would I be candid about, and what would I leave mysteriously a secret? Who were these students? Would they like me?

For the animal, I wanted to do the Lobos to accentuate Arizona’s culture. But it wasn’t on the list of pre-approved animals…but wolf was (yes, I know they are the same…but different). My vision was to create a united pack that would get a wild, howl, and tear their prey apart.

Planning for foundations started around June. There wasn’t too much to do on the cohort leader’s end. Most of my work was going to be in August, which equated to a summer of partying and pooling. I learned who I was working with and was the only male. YAY, I get more attention! Was I becoming a cohort leader to indoctrinate? Yes, and I was going to do a bang-up job at it.

I wanted an excuse to buy another costume accessory. My closet included 80s spandex, yellow wrestling boots, a Deadpool costume, a Hawaiian print suit, and a 19th-century Hussar military jacket. This was the birth of the pub night captain, who already had experience drinking a lot of Twisted Tea in the pool this summer (No wonder I gained weight, those suckers are 400 calories #TwistedTeaKnew). People ask why a sea captain hat and the answer is, why not? Also, “I AM THE CAPTAIN.”

August rolled around, and I needed to organize each student into their G5 groups. For those unfamiliar with G5, it’s like a UN Simulation that is high pressure with a time crush and a negotiation round. Friendships could be built and destroyed in a day.

I organized the groups based on personality (I had access to their DISC assessments), gender, and nationality so that no group was too aggressive, filled with too many males, or was too American or Chinese.

So as captain of the Wolfpack, I was in charge of answering any questions they had and getting them hyped up about Foundations. My 2.5 years as a teacher came back. I was about to enter my zone once the first day of Foundations started.

Instead, on the first day of Foundations, I was awkward. I felt like I was at a career fair, saying hi to people, so I wasn’t just standing there looking like a nervous wreck. I wanted to be everyone’s friend but they were strangers and that equates to danger (self-defense class taught me that). Then it hit me. If I was nervous, these uncomfortable soon-to-be graduate students in stuffy suits knew no one and were probably just wishing to survive the day. Either way, we all survived the first day.

Now the second day was the first time I was meeting the Wolfpack. Creepily, I knew their DISC assessments and what countries they were from. But the classroom was my domain. And I was its master.

I had many impressions of the Wolfpack. They were young. Some of them are fresh out of undergrad. Some of them already had impressive backgrounds. Others seemed less confident in their accomplishments. But I could see their potential.

Speaking in front of everyone was no biggie. Coming up with icebreaker activities on the fly (I really wish I had been told beforehand) was no biggie. Being adaptive in the classroom is something you MUST learn in a Malaysian international school, especially when impromptu assemblies are announced, and now your classes have to be made up in less time. On the second day, the Wolfpack started their own Instagram to win the social media contest. Check it out here: https://www.instagram.com/p/B1ZPfK0A_9A/. They also created, by far, the best sign out of the cohorts.

The team was creative, and I noticed that they were becoming tight. Almost too tight. I’ve been told they were being tribal about their relationships with the other cohorts. What’s a leader to do, eh?

The Wolfpack was not the only cohort I needed to increase my standing with. I was going to be a leader in the student government that fall, so I had to mingle with everyone and let them know that Kelsey, our TSG president, and I were there for them. I was also scouting for potential directors because I knew the second years were going to check out mentally when it came to on-campus activities.

Thursday rolled around, and it was the night of what I do best all of the time: Pub Night. For all the alumni reading, we currently don’t have a pub but rotate every month to 3 weeks at a new pub. We like the variety, but it’ll be nice when the new pub is built with our new building (they probably could put my picture up on the wall).

It was at Cornish Pasty, but for some reason, somebody thought the vampire sex dungeon of a basement was the best place to reserve. It was dark, crowded, hot, loud, and a major fire hazard. I told them the second floor has benches, pool, darts, and air, but what do I know about Pub Nights? That night was the first of many where the first years honored me with a round of shots. I felt popular, like a frat leader.

We had more G5 activities the next day. Because I tell it all and like it is, I felt the experience would have been less stressful if I was handed full power. I’ve had to settle disagreements between employees or students working under me. Conflict resolution came naturally. But having two Type A’s working above you telling you to do two contradictory things and having to navigate that complexity…it creates some sense of disillusionment and disempowerment.

Thankfully I survived and was able to assist in creating an organized G5 summit, even if one of the summits ended in insults and anger.

The next day was the day of the Thunder Olympics. I helped plan some of the logistics with Falcon leader Lina. Half of the games were copied from last year, but the other half were brand new…and more violent. This was also the time when the Falcons were busted for cheating and some poor sportsman-like conduct (tsk tsk), but even with point deductions, they were physically more athletic. But my wolves were the loudest and the only cohort that painted their faces.

We had our closing ceremony that afternoon, and I promised myself I wouldn’t tear up like my cohort leader, Kylee, did last year (love you if you’re reading). I teared up too that year, but that wasn’t the point. With only a half of point difference, the Wolfpack…lost. I only cared because they cared, but other than that, the Wolfpack was MY cohort. They were my babies. And I was taken aback by how social and loving they became with each other. Words couldn’t express my pride in their accomplishments. I also lost my cool when I was awarded “Best Cohort Leader” by my co-workers. I was smiling too hard.

What I did for Foundations came naturally to me. Was it stressful? Heck yes. Was it fun? Heck yes. At the end of the ceremony and during the cleanup, I had to hug those who worked with me behind the scenes: Kelsey, Elle, Hala, Lina, Torie, Earl, and Nailah. WE SURVIVED! I was relieved that I could take a short break before school began. As much as I enjoyed being a cohort leader, once was enough for me…or so I thought.

Note: This article was originally written in Spring 2020 but was not archived.